An "Autograph and Something More" from Frederick Douglass 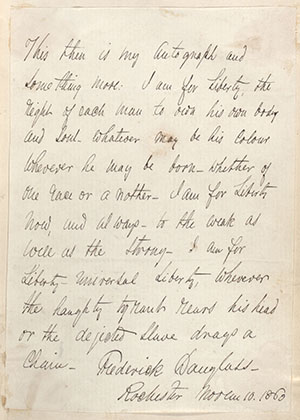 Between 1855 and 1886, Franklin E. McNear collected autographs in his leather-bound, red autograph book. Among the eighty-four signatures are notable historic figures like P.T. Barnum, Ralph Waldo Emerson, and Frederick Douglass. Penned in 1860, the Frederick Douglass page includes more than just his autograph. Take a look at the image shown here to see the words Douglass wanted to accompany his autograph:

This then is my autograph and something more. I am for Liberty, the right of each man to own his own body and soul, whatever may be his colour wherever he may be born - whether of one race or a nother - I am for Liberty now, and always - to the weak as well as the strong - I am for Liberty - universal Liberty, wherever the haughty tyrant rears his head or the dejected slave drags a chain.

Read letters written by Frederick Douglass on racism, Jim Crow, and the disfranchisement of black voters.