A Civil War soldier’s letters: "Save them if it cost the farm"

George Tillotson from Greene, New York, enlisted with the 89th New York Infantry in November of 1861. This ambrotype (photograph made on glass) and a series of letters from the summer of 1862 remind us that soldiers and their families faced hardships on the home front as well as on the battlefield. George had been in the army for five months and was stationed at Roanoke Island, North Carolina, when his wife, Libby, sent him the photograph featured here. The photograph was damaged in the mail and began a heartbreaking series of correspondence. 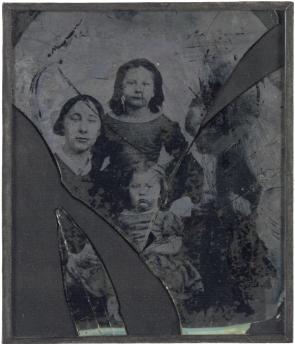 April 19, 1862 – "Your letter of the 6th inst containing your pictures I received to-day all safe but not quite sound the glass being cracked. I can assure you it affords me a great deal of pleasure to gaze on those loved countenances but it would a great deal more to embrace those originals."

June 28, 1862 – "You cant imagine the shock which the announcement of Lucys death caused me. I have been in the hospitoll now for three or four weeks but am getting better."

July 2, 1862 –"I had some hopes of getting a furlough but yesterday I spoke to the Colonel about it and he said there had been an order issued from head quarters not to grant any more furloughs whatever."

July 9, 1862 –"I read Violas letter to George Sherwood today and had a crying spell over it, you can guess why. Has Leon and Georgina got well. Save them if it cost the farm and all the rest."

July 19, 1862 –"Oh! how I do wish Dear Lib that I was at home to share your troubles, anxiety, sorrows, and to relieve you in some of your phisical labors, though anxiety and sorrow for our loss and our danger to loose I feel acute enough here. How I tremble to think how near Georgiana also has been to the brink of the grave."

July 24, 1862 – "I am very anxious for the next letter from home for I have fears for Georgina yet in spite of the doctor’s assurances but last night I dreamed of being at home and found all there to kiss except Lucy and her I enquired for."

July 30–August 1, 1862 – "It is now almost a month since I have heard from home and Georgiana then so sick you can imagine my anxiety for a letter. . . . Oh! How I wish I knew how Georgina and all the rest of you have got along since July 5th a fellow might as well be banished to the island vandermonsd land [Vandemonian Land or Tasmania, Australia] for all the changes of communication."

The children eventually recovered, but their father’s fear for their health is palpable for the rest of the war.

The Tillotson Collection contains 208 items spanning from 1861 to 1898. The Civil War–era letters cover a wide range of topics from gruesome descriptions of the war to witty observations of people and events and even flirty endearments to his wife and her "kissing battery." George is pro-Union, but against abolition. He also comments quite frequently on female nurses and women’s rights. Throughout his enlistment George suffers from a variety of illnesses including typhoid, dropsy, and chronic diarrhea. Although he is wounded in the foot, he survives the war remarkably unharmed considering the losses he reports for the rest of his regiment. As George responds to his wife’s letters, we catch a glimpse of life on the home front and the hardships faced by families of soldiers. The letters address the daily tasks of running a farm, building a new home, a child starting school, a scarlet fever epidemic, and the loneliness and fear that come from having a loved one at war. (Because soldiers had to carry all their possessions, including their mail, on their backs, not many letters written to them survived.)

We tend to think of the Civil War in terms of battles and politics. It is surprising to many that soldiers’ letters focus on family, friends, food, and events at home. The Gilder Lehrman Institute invites you to explore the papers of George Tillotson and experience the Civil War through the words of a devoted husband and father, who also happened to be a soldier, and learn what happened to George, his wife Elizabeth ("Libby"), and his children Leon, Georgina ("Dolly"), and Lucy.