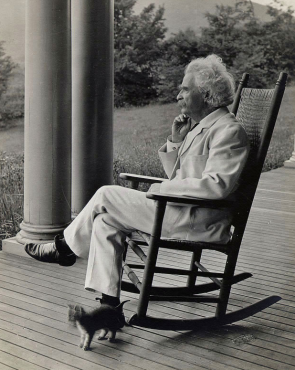 Mark Twain famously said that he had come in with Halley’s Comet in 1835 and expected to go out with it on its return journey. Indeed, Twain did die in 1910 as the comet was making its return pass. In the intervening years Twain became, and remains, one of America’s most beloved writers.

The Mark Twain Project at UC Berkeley allows Twain fans access to Twain’s personal and published writings. You can delve into more than 2,400 letters written in the years 1853–1880, each with notes to provide context. All three volumes of Twain’s autobiography and The Adventures of Huckleberry Finn are available with deep scholarly, and entertaining, annotations. Other titles are added on an ongoing basis. The site also contains hundreds of images worthy of perusal. So celebrate Twain in style.

Fun Fact: Twain also loved cats. Here he sits on his porch in the company of a small friend in a 1906 photo by Albert Bigelow Paine.

Of all God’s creatures there is only one that cannot be made the slave of the lash. That one is the cat. If man could be crossed with the cat it would improve man, but it would deteriorate the cat.
— Mark Twain’s Notebook, 1894