Between the pages of his math exercise book John Barstow jotted down a patriotic tune called "The Amaricans Challing" on January 2, 1777. Carefully written in a youth’s unsteady hand, the text appears to be a transcript of a popular camp song from the Revolutionary era. How this declaration of patriotism found its way into Barstow’s math lessons is unknown. The book is filled with conversion tables for weights and measures, time and money tables, and multiplication and division tables in addition to mathematical problems. One can imagine a young child learning the song from a father or older brother going off to war or hearing the tune sung by soldiers who marched through town. Perhaps it was simply doodled during an instance of classroom boredom. This unexpected entry is, however, evidence of the patriotic fervor that young John and other children must have felt. 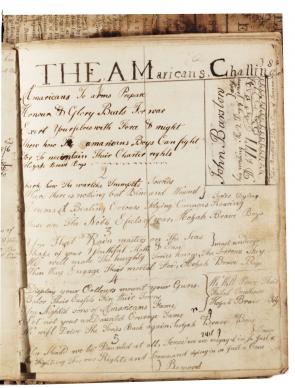 The song was composed as America prepared for war around 1775. Songs such as this would be performed by soldiers at camps and during marches to boost morale. The author of the song is unknown. A variant copy, dated December 31, 1775, is housed at the New England Genealogical Society.

hark how The warlike Trumpets Sounds
Where there is nothing but Blood and Wound
Drums A Beating[,] Colours Flying[,] Cannons Roaring[,] Tories Dying
These are The Noble Efects of war, Hozah Brave Boys

You That Rain masters on The Seas
Shake of your Youthful Sloth & Ease
We will make The haughty Tories know, The Sorrows They must undergo
When they Engage Their mortal Foe, Hozah Brave Boys

Display your Collours[,] mount your Guns,
Bator Their Castels[,] Fire their Towns
You Nighted sons of Amaricans Fame
Let not your unDaunted Courage Tame
We will Drive The Tories Back again; hozah Brave Boys