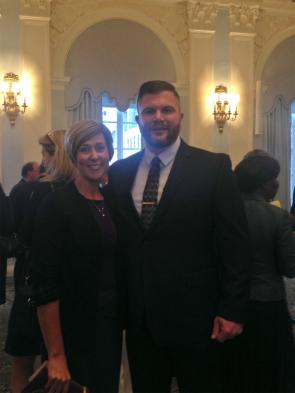 Yesterday, we honored Kevin Cline of Indiana as the 2016 National History Teacher of the Year in an exciting ceremony at the Yale Club. Mr. Cline’s award was presented by historian Gordon S. Wood, Alva O. Way University Professor and Professor of History Emeritus at Brown University.

Learn a bit more about Kevin Cline, National History Teacher of the Year, with the Q and A below!

Q: What’s the best history book—American or otherwise—you’ve ever read?
A: I read Killer Angels by Michael Shaara and The Things They Carried by Tim O’Brien when I was younger, and would say that my enjoyment of them definitely continued my momentum toward a career in history. The most recent books I’ve read and loved have been Richard Brookhiser’s James Madison and Gordon Wood’s Revolutionary Characters.

Q: Out of the historical sites and museums you’ve visited, which one has left the greatest impression on you?
I had the chance to attend a teacher’s seminar on the Constitution at Montpelier, and having the chance to not only stay on the property, but discuss and debate the founding influences for such a monumental document in the shadow of the house in which Madison constructed the basic plan that would so heavily influence it was incredible.

Q: What part of teaching always puts a smile on your face?
A: Easy—the kids. I can express how much joy I get out of the fact that I wake up each day excited to go to work, and that is because of the kids I teach. Like any teacher, I can fall into a rut, have a bad day, be in a bad mood, but the kids rescue me each time. There is not a single good thing that happens in our classroom that isn’t because of them.

Q: If you could travel back in time and meet any historical figure, who would it be and why?
A: I know this is cheating a bit, but I’d like to be a fly on the wall of the Constitutional Convention in 1787. There is so much debate over the intentions of the Framers, and I’d love to talk with them about what they envisioned the Constitution to be 229 years later.

Q: What historical films or shows would you binge watch on a rainy afternoon?
A: I am a West Wing addict; that show never gets old. When I can watch them all the way through, I love Gettysburg, Last of the Mohicans, and I can never get past the power of Schindler’s List.