Noah Feldman - "The Broken Constitution: Lincoln, Slavery, and the Refounding of America"

Order The Broken Constitution: Lincoln, Slavery, and the Refounding of America at the Gilder Lehrman Book Shop

Robert W. Lee - "A Sin by Any Other Name: Reckoning with Racism and the Heritage of the South"

John Avlon - "Lincoln and the Fight for Peace"

Our National Cemetery and Its Honored Dead: The African American History of Arlington

Adapted by permission of Ric Murphy from his book, Section 27 and Freedman’s Village in Arlington National Cemetery: The African American History of America’s Most Hallowed Ground (McFarland & Company, 2020), co-authored with Timothy Stephens. 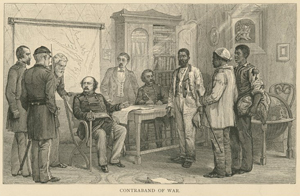 On May 24, 1861, an event happened that would change the trajectory of the Civil War and the lives of millions of enslaved people, and give rise to our nation’s national cemetery on the grounds of the home of Confederate General Robert E. Lee at Arlington House, Virginia.

On that day, Major General Benjamin Butler learned that three enslaved men, Frank Baker, James Townsend, and Sheppard Mallory, had fled to his Union military encampment at Fort Monroe, Virginia. These three men were enslaved by the commander of the local Confederate Virginia troops and sought refuge to avoid being sent further south, fearing they would never come north or see their families again. [1]

Their enslaver sent a flag of truce, demanding the return of the enslaved men under the Fugitive Slave Law. General Butler refused to comply on the ground that runaway enslaved people who belonged to insurgents would consequently become contraband of war. When word spread, it encouraged other nearby enslaved people to seek refuge at Fort Monroe and behind Union lines. The protection provided by Butler and his regiments at Fort Monroe (regarded by African Americans as “Fort Freedom”) sent a powerful message to enslaved people: the time to escape was upon them. 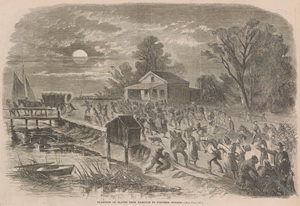 Enslaved people initially overwhelmed the resources of Fort Monroe, but in time they traveled north in search of freedom and opportunities denied to them on southern plantations. To evade recapture, they traveled at night. During the daytime, the Confederate and Union Armies crisscrossed northern and eastern Virginia, and the sounds of gunshots and cannon fire were always close.

The chaos of war created tremendous anxiety in the farmlands and communities surrounding the battlefields. As dead bodies and human remains scattered throughout the fields of northern Virginia, the enslaved took every opportunity to plot their strategy for escape.

For the runaways, particularly those from Maryland and Virginia, the District of Columbia became the refuge of choice. The capital city had a high proportion of federal troops to protect them from their enslavers, and it promoted itself as a location for work with pay, providing the “contraband of war” an opportunity for a fresh start.

The contraband arrived while the city was absorbing another population: sick, wounded, maimed, and dying soldiers from the Civil War battlefields. The city had no existing system in place to absorb this large influx of people in need, whether White or Black, civilian or military, sick or able-bodied.

Conditions in the city became unhealthy due to infectious disease, a degraded environment polluting the water supply, and a high concentration of congested contraband camps and military hospitals. The city lacked a government support system to handle the arrival of sick, wounded, maimed, and dead soldiers, along with Black refugees in ill health.

For thousands of people who escaped from slavery, their ultimate success in reaching the safety of the contraband camps in Washington often led to their own premature deaths. For many, their compromised immune systems were not strong enough to endure the diseases of the contraband camps once they arrived. Infectious diseases such as diphtheria, measles, and typhoid fever were rampant in overcrowded camps. In some camps, the dreaded and highly contagious smallpox spread, causing fear and panic; there was an overall fear that the isolated outbreaks would eventually spread and overtake the city.

Between June 1862 and June 1864, the death rate at the contraband Camp Barker alone approached one in seven. [2] By the spring of 1863, “more than 10,000 persons seeking asylum were living in Washington.” [3] As conditions in these tent cities deteriorated and “a high rate of death due to disease resulted, it was decided to relocate some of the contraband outside of the city.” [4]

During a smallpox outbreak, the fresh, open plantation at Arlington House, the recently abandoned home of Confederate General Robert E. Lee, was suggested to Secretary of War Edward Stanton as an appropriate relief location for the contraband. [5] This decision would lead to the founding of Freedman’s Village in 1863, a permanent solution to relocating the enslaved in the Washington area. A public health emergency, defined by social and political conditions in flux, drove the relocation to the plantation grounds at Arlington.

Washington, DC was in many ways an anomaly, a capital behind enemy lines. This complicated the ability to bury the Union dead. Washington was the Union city closest to six of the ten deadliest battles in the war; the other four were fought in Georgia, Tennessee, and Mississippi. Approximately 280,830 men were killed in just these ten battles. Washington would bear the brunt of the responsibility for interring the Union fallen.

As the city’s population surged with soldiers and support personnel for the war, along with increasing numbers of fleeing contraband, so too did the population of the cemeteries as the war dead and the enslaved sick arrived. The city’s cemeteries reached full capacity. Arlington the cemetery as we now know it was established as a “purely practical measure” to accommodate the deceased from the District of Columbia who could not be buried at the filled-to-capacity graveyards of the Soldiers’ Home Cemetery, Union Cemetery, and the free Black Columbia Harmony Cemetery. [6]

On July 16, 1862, Congress passed legislation authorizing the US federal government to purchase land for national cemeteries for the military dead. US Army Quartermaster Brigadier General Montgomery C. Meigs was put in charge of the program. [7]

As the city of Washington became increasingly burdened with the bodies of the war dead arriving after each battle, Arlington House, located just across the Potomac River via the Aqueduct Bridge, with its vast fields cleared of trees, became an attractive and opportune site for burials.

Military leaders, particularly General Meigs, were angered by Robert E. Lee turning his back on the Union, and considered him a traitor when he chose to lead the Confederate Army of Northern Virginia. Meigs’s bitterness was especially poignant since the two men had worked together and once had a close relationship. Faced with ever-increasing numbers of Union dead, Meigs faced increasing pressure to find adequate space for burials.

Meigs could now strike back at his one-time friend by burying bodies on the very plantation fields from which Lee’s family profited. This would deny the family access to an estate they treasured by possibly tainting the ground water supply and making it unfarmable and thus worthless.

Once the plantation became official as a national cemetery, Meigs had engineers survey the grounds to accommodate as many bodies as possible. By official count there are more than 16,000 Civil War soldiers buried at Arlington. The number of United States Colored Troops is officially estimated at 1,500, nearly all in Section 27, and hundreds more in Section 23.

Initially a potter’s field, the part of Arlington National Cemetery now known as Section 27 offers deep historical insight into the plight of the fugitives escaping enslavement and the horrific challenges that many faced during the war once they reached the city of Washington. Most burials in the original portion of Arlington Cemetery occurred between 1863 and 1867. By the middle of 1867 the African Americans buried at Arlington’s Section 27 “were reported to number 3,540. Later, the total was put at 3,639 . . . more than 1,000 were laid to rest in 1864 alone, with 1,391 civilian freed people buried from August 1864 through June 1865.” [8]

The poor unfortunate soul found deceased on the side of the road or in the fields of war was often anonymous. The simplicity of their headstones, devoid of dates, reflects a time of constant burials. Many of the stones are simply marked “Unknown.”

Not all enslaved people were designated as “Unknown.” Many of them, after reaching Union territory and achieving freedom, rejected the surnames given to them by former enslavers and instead chose their own names, indicating their newly freed status.

The “enslaved name” of the man interred in grave number 27:3493 has been lost to history. However, this man boldly changed his name to Abraham Lincoln in honor of the sixteenth president of the United States. By today’s standards, it may seem unusual to rename oneself after an important historical figure such as an American president.

However, this was a period in American history when thousands of enslaved men, women, and children were asked for the very first time, “What is your surname?” For many, to be able to shed their enslaved name and rename themselves after important figures in their struggle for freedom was indeed an honor.

When walking through Arlington’s Section 27, one cannot help but reflect on the challenges faced by the enslaved. The families of the deceased had no funds for proper burials. Many impoverished forgotten souls were sent to paupers’ graves at Arlington, where their markers bear present-day inscriptions that read either “citizen” or “civilian.” The lack of proper documentation was due to errors and omissions compounded over the years by changes in record-keeping practices and departmental responsibility.

As in life on the plantation and as part of the African diaspora, enslaved families were permanently separated. Each grave represents a single burial with no apparent surrounding family members or a cluster of names indicating that the burial plot is part of a larger family grouping. Most are buried in an east-west pattern, with the stones facing east and presumably the head of the deceased facing west as if to observe the sunset.

In 1863, President Lincoln allowed African American men to enlist in the United States Colored Troops, enabling them to help preserve the American Union and to liberate Americans of African descent. In time they soon joined the military dead arriving at the national cemetery in Arlington. The custom of segregation of the races in life and in death meant their burials were separate from the White military dead, and they were sent to Section 27.

Arlington National Cemetery is now respected as the most sacred of cemeteries in the nation. At the close of the Civil War, nearly 16,000 dead were buried on the property once known as Arlington House, 4,000 of whom were unknown soldiers.

Section 27 contains the remains of almost 3,800 formerly enslaved men, women, and children who escaped from plantations in Virginia and Maryland. By November 1867 burials of Black civilians ceased. The burial of United States Colored Troops continued into 1868, and in Section 27 approximately 1,500 of those Black soldiers rest alongside the people they gallantly sought to protect and liberate. [9]

Arlington National Cemetery’s Section 27 and its rich history are hidden in plain sight, just waiting to be explored.

On February 3, 2022, our curators were joined by Dr. David Blight to discuss his favorite Frederick Douglass documents in the Gilder Lehrman Collection.

The Life and Writings of Frederick Douglass

The History of Anti-Slavery Writings

The History of American Protest